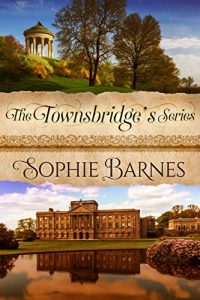 If you love Regency romance, you’ll simply adore the Townsbridges…

Once Upon a Townsbridge Story

The time has come for George Townsbridge to marry. But how can he convince Margaret to give him a chance when he is rumored to be the exact sort of man she hopes to avoid?

When Love Leads to Scandal

When Charles Townsbridge meets a beguiling young woman in the park, he’s smitten. Unfortunately she’s his friend’s fiancée, so he knows she can never be his. Or can she?

James Townsbridge dislikes Lady Abigail, but circumstance forces the two into marriage. Now, as he gets to know her better, might he discover that his perception of her was wrong?

When William Townsbridge returns from Portugal and meets his mother’s new cook, it’s just a matter of time before he loses his heart completely. But is a shared future possible?

A Duke for Miss Townsbridge

Sarah Townsbridge knows there’s something wrong with the duke next door, so she decides to save him. But is she prepared to fall for a man who has sworn off love forever?

Athena Townsbridge ruined Robert Carlisle’s chance at marriage once. Will he keep holding a grudge when she tries to make amends, or will he start seeing her in a new light?