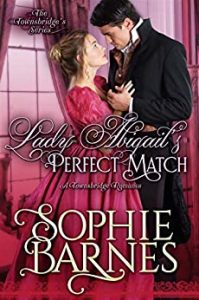 A kiss can cure any ailment…

Lady Abigail has been infatuated with Mr. James Townsbridge for three years. But when she is finally introduced to him, she finds him arrogant and rude. Unfortunately, this doesn’t stop her heart from racing or her stomach from flip-flopping while in his presence. In fact, being near him makes her feel somewhat ill. Which complicates matters when they are suddenly forced to marry.

James doesn’t like the aloof young lady to whom he has recently been introduced. And since he has a blistering headache, he doesn’t have the patience for someone who clearly doesn’t want to be in his company. But when she lands in his lap and he accidentally rips her gown, his duty is clear. Now James must try to get along with his awful fiancée, or risk living unhappily ever after. But is that possible?