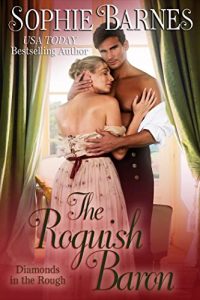 When a rakish scoundrel decides to pursue the woman he loves in this friends to lovers Regency romance, he risks his father’s disapproval…and the consequence this will have on his future.

Jack Lancaster, Baron Hawthorne, hasn’t been home in four years. He’s been too busy running from his emotions. So when he finally does return and discovers his childhood friend, Sophia Fenmore, has gotten engaged, he’s not only shocked, but determined to change her mind and make her his.

Sophia has always known Jack was out of her league. But she valued his friendship, until he broke her heart. Now he’s back, as eager to charm her as she is to thwart him.For as much as she’d like to believe Jack has changed, she cannot risk taking a chance on a rogue. Unless of course, he proves himself worthy.

*Previously published as part of The Rogue Who Stole Christmas anthology*