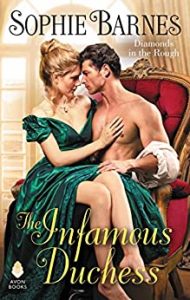 A woman with a shocking past…

Branded a money-hungry con artist for marrying the elderly Duke of Tremaine days before his death, Viola Cartwright has found refuge in her work at St. Agatha’s Hospital. No one must know the painful reason behind her marriage. She steers clear of attachments—until Henry Lowell, heir to the Viscount Armswell, lands on her operating table after a duel. Charming and wickedly handsome, Lowell is one of London’s most inveterate scoundrels. Yet he may not be all that he appears.

And the man who can promise a future filled with love…

Posing as an unrepentant rake has helped Lowell avoid women pursuing him only for his title. But now that duty has finally called on him to marry, he finds himself entranced by the mysterious, independent-minded Viola. Then her late husband’s son returns from overseas, contesting Viola’s inheritance. Lowell longs to help her and sets out to convince Viola that a strategic union may be the best way to save all she holds dear. But can he also persuade her to take a chance on love…?