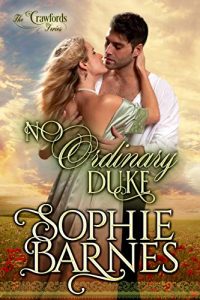 He’s everything she’s trying to avoid…

But somehow precisely what she needs…

Caleb Crawford doesn’t want to be a duke. He’d much rather build houses for a living. So when fate disrupts his peaceful life and burdens him with the responsibilities of a newly inherited title, he does what any sensible man would do by fleeing London, disguising himself as a laborer, and seeking refuge with three young spinsters who need his help with a leaky roof.

Ruined by a marquess who promised her the world, Mary Clemens has sworn to avoid marriage forever. Instead, she intends to live out her days with her friends and the orphaned children they’ve taken into their care. But when Mr. Crawford comes knocking, Mary finds herself in real danger of risking heartbreak all over again. Especially when she discovers that he’s not at all what he seems.