The Secrets of Colchester Hall 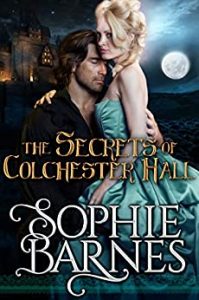 The Secrets of Colchester Hall:

She’s the woman he wants… But will his love for her be enough to make her stay?

As one of six possible candidates vying for Viscount Sterling’s hand, Lady Angelica has been invited to stay at his grand manor for a week-long house party. But an unpleasant feeling lurks within Colchester Hall. It’s almost as if someone’s watching Angelica just beyond the edge of her vision. And while she tries to explain the chill creeping up behind her as merely a draft, she can’t shake the feeling that something disturbing might be at play.

When Sterling decides she’s the woman he wants, can Angelica accept her new home and the sinister secrets she fears it might hold, or will she give up on true love because of what could be nothing more than her own imagination?

A Gothic inspired Regency Romance to get your heart racing.

NOTE: This novella was previously included in the Wicked Liaisons anthology which has since been discontinued.