The Scandal in Kissing an Heir 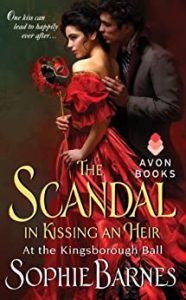 The Scandal in Kissing an Heir:

He is the next Marquess of  Wolvington . . .

She is a lady with nothing but beauty and wits . . .

Lady Rebecca is determined to find a husband on her own terms, rather than marry any of the aging suitors her greedy aunt and uncle foist upon her. Her chance comes at the Kingsborough Ball, where she meets several potential grooms . . . yet no one compares to the dangerously handsome Daniel Neville.

Notorious rake and heir to the Marquess of Wolvington, Daniel Neville is in need of a bride, but finding a lady who’s willing to accept his past is an entirely different matter. When he spies a stunning woman across the ballroom, Daniel believes he’s found her . . . until scandal erupts around them. How can he convince Rebecca to take a chance on him . . . and on the love that could be theirs forever after?