The Girl Who Stepped into the Past 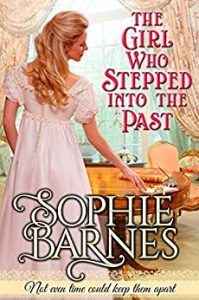 The Girl Who Stepped into the Past:

She was looking for inspiration…

When historical romance author Jane Edwards goes to England on a research trip, she doesn’t expect to travel two hundred years into the past. She also doesn’t expect to be accused of murdering the Earl of Camden’s sister. Presented with few choices, Jane decides the best course of action is to help Camden find the real killer. But the more time she spends in his company, the more she falls for the dashing earl, and the more she hopes for a life with him by her side.

And found love in the most impossible place.

James Sullivan, Earl of Camden, is convinced Jane had something to do with his sister’s murder. Until he learns she lacked the ability to accomplish the feat. Still, her explanation about stopping by his home in the middle of a rainstorm to seek employment, doesn’t add up. And yet, when he offers her the position she supposedly seeks, he discovers the smart resourceful woman she is. Which makes him wonder if marrying his new maid, might be worth the risk of scandal.