The Danger in Tempting an Earl 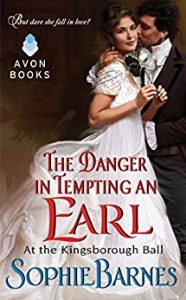 The Danger in Tempting an Earl:

Lucien Marvaine never thought he was good enough for Katherine. As the younger son of an earl, he didn’t have a title or prospects. Then fate steps in and gives him a second chance, and this new Earl of Roxbury is determined to make the beautiful Kate his own . . . one touch . . . one kiss at a time.

Katherine never thought of herself as a temptress, certainly not with Lucien. Why, she’s known him almost all her life! Yet as she waltzes in Lucien’s arms at the Kingsborough Ball, she can’t help but be drawn to him. Has he always been this hard and masculine? And where did those dimples come from? Kate is not looking for a husband . . . but how can she not surrender to Lucien’s charms when love is at stake?